There is a need for increase production and productivity in the agricultural sector which can be addressed by strengthening the integration process among stakeholders. This can be achieved by making all stakeholders aware of their role in the agricultural sector. It is also important for stakeholders to understand the various services and existing processes and how they can be benefitted through collaborative participation and dialogue. Agricultural extension service is a key component for improving the farmer’s productivity and therefore the strengthening of this service is paramount.

The Ministry of Industry, Commerce, Agriculture and Fisheries (MICAF) has been charged with the responsibility of driving the integration of the production of primary agricultural produce along all the stages of the supply chain through to value added and facilitating full commercialization of outputs of the agriculture, manufacturing, and service sectors.

Our mission is to lead the dynamic transformation and modernization of the Agricultural Sector by being the authoritative source of policy advice. The Directorate makes recommendations for the adoption of policies, strategies, goals and plans that promote market-driven and priority-based research and development programmes, which will increase competitiveness and sustainable output in the Sector. Agricultural health and food safety, trade facilitation, as well as conservation of biodiversity are central to the Directorate's activities that seek to enhance the transformation process.

There are twenty one agencies under the ministry of which Rural Agricultural Development Authority (RADA) is Jamaica’s chief Agricultural Extension and rural development agency. RADA is a statutory body under the Ministry of Agriculture and was established under act in 1990 (began August 1st 1990) to replacing the Land Authorities Act.

The Mission of RADA

The Rural Agricultural Development Authority (RADA) is committed to promote the development of agriculture in Jamaica, as the main engine of growth in Rural Communities; through an efficient, modern and sustainable extension service which will enhance the national economy and improve the quality of life of farm families.

The organization has over 220 extension staff and over 210,000 registered farmers as a result RADA is the most competent arm of the ministry to reach the stakeholders in the agriculture industry.

Hence the reason the Jamaica Country Fora was placed under its responsibility, Jamaica focal point for the Country Forum Glenville Hall make presentation on the background of CAEPNet and Gfras at the forum.

In the context of meeting the holistic needs of increasing agricultural production in a sustainable manner, agricultural extension has a crucial role to play. Reforms in the system envisage an extension service more broad-based and holistic in content and scope, thus beyond agricultural technology transfer. Its normal task of transferring and disseminating appropriate technologies and agronomic practices would not be sufficient. Extension agencies, services and workers will need to exercise a more proactive and participatory role, serve as knowledge/ information agents, initiating and facilitating mutually meaningful and equitable knowledge based transactions among agricultural researchers, trainers and primary producers. All this needs to be done in an effective and cost efficient manner.

The Jamaica Country Forum sensitization was held on the Thursday, July 26th, 2018 at the Guys Hill Town Hall in St Catherine. The meeting commences at 10 a.m. and was chaired by Glenville Hall the Jamaica CAPENet focal point. He delivered a PowerPoint presentation on Gfras and CAPENet role in Rural Advisory Services (RAS). The need for effective stakeholder’s collaboration in order to utilize the scarce resources available in Jamaica and to prevent monopoly was presented. 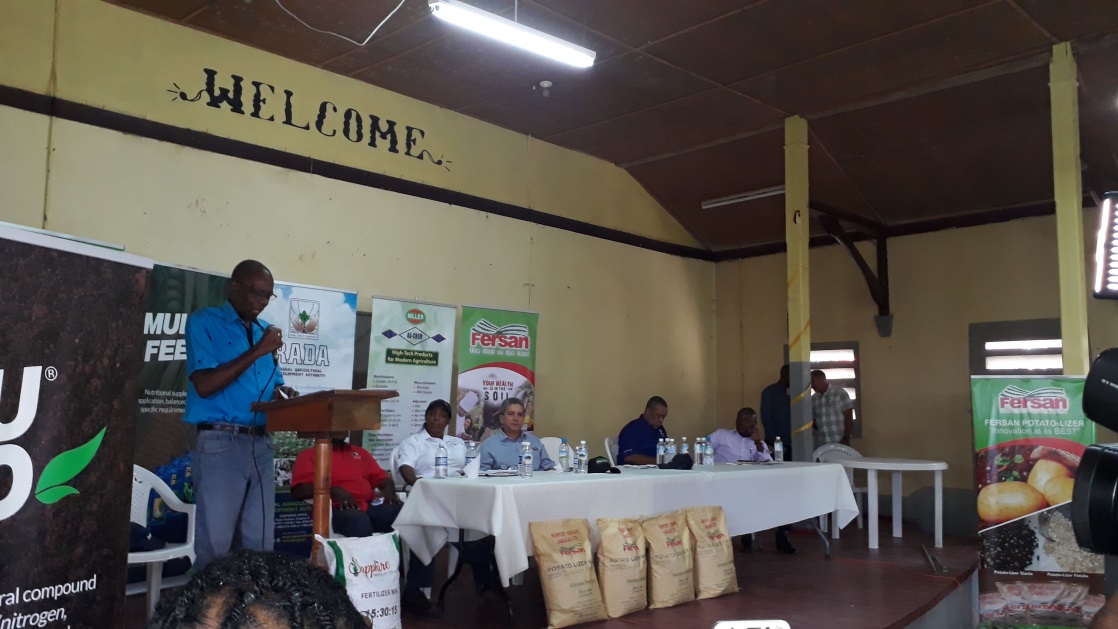 The Keynote Address was given by Honourable William James Charles Hutchinson, MP, Minister without Portfolio in the Ministry of Industry, Commerce, Agriculture and Fisheries. Minister Hutchinson speaks of the importance for stakeholder’s involvement in the agriculture sector as he stated that Government cannot do everything for the farmers. He further stated that organization like the Country Fora can help to guide policies of government and create a balance in the sector.

Minister of Industry, Commerce, Agriculture and Fisheries, Hon. Audley Shaw (centre) shares a light moment with Glenville Hall (left), Zonal Director, West and Peter Thompson CEO, both of the Rural Agricultural Development Authority at a quarterly stakeholders meeting to discuss the establishment of the Jamaican Country Forum held October 3, 2018 at the Medallion Hall Hotel in Kingston.

Industry, Commerce, Agriculture and Fisheries Minister, the Hon. Audley Shaw, has welcomed the establishment of the Jamaica Country Forum, being spearheaded by the Rural Agricultural Development Authority (RADA).

The network, aimed at strengthening the provision of Agricultural and Rural Advisory services in a coordinated manner will include participation from all stakeholder groups which provide Extension Services.

Addressing the quarterly stakeholders meeting on Wednesday, October 3, Minister Shaw told participants that the provision of Agricultural Extension Services was a key component for improving the productivity of farmers.

Collaborations, partnerships and knowledge sharing among stakeholders within the sector were also critical to ensure a sustainable rural extension advisory service, Minister Shaw said.
In addition, the Minister said he was heartened to witness the integration of the Global Forum for Rural Advisory Services (GFRAS) a structure consisting of regional and international Rural Advisory Service Networks and the Caribbean Agricultural Extension Providers’ Network (CAEPNet) collaborating with RADA to establish the local network (Country Forum).

For his part, Glanville Hall, who is the focal point in Jamaica for the Caribbean Agricultural Extension Providers Network and a Zonal Director at RADA said the national forum wanted to have Extension Services Providers under one umbrella in order to advise policy makers and to lobby for actions which would allow for pluralistic extension services.

Mr. Hall announced that Jamaica has been selected to host the Global Forum for Rural Advisory Services (GFRAS) 10th annual conference in 2019.

·       To establish a coordinating structure for all extension service providers.

·       To strengthen the extension agricultural services

·       To build cohesiveness and information sharing among stakeholders with an aim to contribute to the improvement of agricultural productivity.

The stakeholders discuss the need to facilitating collaboration in agricultural production as Government budget reduces every year and is insufficient to carry out the well needed extension activity in the way it is supposed to be done. The need for more research and Extension Education methodology to build capacity was also supported. Other topics discussed were steps towards achieving food security, proper management of the value chain and opportunities to be explored in the market place

Role of the Lead Agent

RADA as the chief technical arm of the Ministry of Industry, Commerce, Agriculture and Fisheries delivers training and extension services to the farming community. RADA uses statistical data to guide policy and planning with the objective to improve production, productivity, value-added and marketing in the agricultural sector.

- The role of the lead agent was a major topic up for discussion. It was stated that RADA must ensure the continuity of the forum.

RADA will lead in coordinating all extension service providers through the formation of a national committee. This working group will meet quarterly to develop a framework, implementation strategy and an administrative structure for Agricultural Extension Services.